INTAROS Heading North with a New Generation of Arctic Scientists 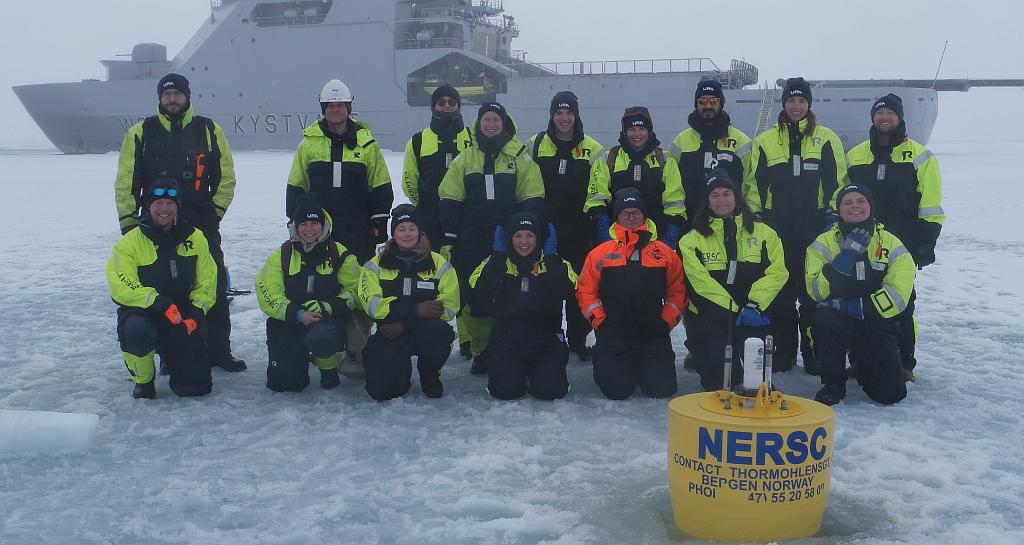 The Nansen Environmental and Remote Sensing Center in collaboration with partners organized a scientific cruise with the Norwegian Coast Guard’s icebreaker KV Svalbard from 5 to 18 June 2021. The cruise included a research school for Master and PhD students with focus on practical training in use of various instruments for sea ice and ocean observations. The cruise took place in the sea ice area north of Svalbard and offered a unique opportunity to learn about field work and data collection in oceanography, ocean acoustics and sea ice research. The participants were really an international team of younger as well as more experienced researchers,  The team consisted of 7 instructors and 12 students from 9 different countries: Norway, Poland, USA, Germany, Denmark, Russia, Canada, United Kingdom, and Turkey.

The cruise departed from Tromsø on 5 June and sailed to Longyearbyen to pick up equipment and personnel. The field work started with the deployment of an acoustic buoy on the first day when KV Svalbard entered the sea ice just  north of Svalbard . The buoy recorded ambient noise data during the cruise and was received after one week on the way back to Longyearbyen.  A part of the programme was the two-day long ice station where the students worked on the ice, learning how to use a number of different instruments for data collection. The work included drilling cores to measure sea ice thickness, snow cover and other properties. Drones were flown to obtain high-resolution images of the sea ice. An ROV with camera was used to observe the underside of the ice where ice algaes were detected in many places. A 3-D scanning laser was used to map ridges in very high resolution. Satellite remote sensing data were obtained from Sentinel-1 and Radarsat 2 for mapping sea ice on regional scale and for planning the location of the ice station. The SAR data obtained every day in near realtime were important for use ice navigation to ensure that KV Svalbard could find the best sailing trout through the sea ice. The oceanographic programme consisted of CTD-stations, XBT-casts, recovery and deployment of a bottom-anchored mooring under the sea ice.  Work with moorings in sea ice is a challenging task, but the crew on KV Svalbard has built up long experience in such operations. Drifting buoys for the International Arctic Buoy Program were also deployed on ice floes in different positions during the cruise. The activities onboard the icebreaker and on the ice station was documented on video and will be part of the education and outreach material after the cruise.   Before the cruise was completed and the participants went ashore in Longyearbyen all the data were assembled and organized on a hard disk for later processing and analysis.

After 14 days onboard KV Svalbard, the researchers and students disembarked in Longyearbyen, with an extensive dataset to investigate and lifelong memories of conducting field work on top of the Arctic Ocean.

What was the aim of the research school?
The research school provided training in use of instrumentation for data collection in oceanography, ocean acoustics, and sea ice research. Lectures about the Arctic ice-ocean environment and operations in the Arctic were given onboard by the scientists and KV Svalbard officers. After learning how to collect and document data in the field the students produced videos about the activities during the cruise!

Please take a look at their three minutes videos:

Projects and parties that made the research school onboard KV Svalbard possible
The research school was part of  the H2020 project INTAROS – Integrated Arctic Observation System, contract no 727890 (http://intaros.eu,  http://intaros.nersc.no) and the project Useful Arctic Knowledge: partnership for research and education (UAK), funded by the Research Council of Norway (contract no 274891). The research school was also supported by the project Digital Arctic Shipping, funded by the Research Council of Norway (contract no. 309708) for the drone work conducted by NORCE. Furthermore, Norwegian Meteorological Institute’s Ice Service contributed with personnel and SAR data and the CIRFA project at University of Tromsø contributed with Fine-resolution Quad-pol SAT data. Office of Naval Research Global contributed with personnel and travel support. Finally, the Norwegian Coast Guard is acknowledged for providing 14 days of ship time with KV Svalbard, which made it possible to organize the research school.